First of all, to all my fans, I hope you’re digging See You Tonight. We’ve been working on this for over a year now, putting this thing together, so I’m glad it’s finally out there for people to hear other than myself and the truck. It’s fun and hopefully you’re enjoying it.

You know how much I like baseball, so it was a treat today to spend time at Major League Baseball Advanced Media’s headquarters inside of Chelsea Market in New York City. We recorded some songs off the new album, so keep an eye out at MLB.com for the videos in the days to come.

Just finished playing for the folks at @MLB havin a great time in NYC! #seeyoutonight pic.twitter.com/tfU13xKDFM

Like I’ve said before, I have two favorite teams. One’s my main team, and the other is the team I just root for. My Dad grew up in the New England area, so I was raised as a kid with all things Boston, and that means Red Sox. The Braves are my other team because I’m in North Carolina and that’s who I’m for in the NL.

The Braves were close. We were rooting for them. Like I said earlier on this blog when the postseason started, I expected Boston and St. Louis in the World Series but I was gonna root for Atlanta. Luckily, I’ve still got the Sox. Man, we’re hangin on by a thread, aren’t we? We’ll see how they handle Anibal Sanchez, Max Scherzer and Justin Verlander. How do they get all those pitchers on one team?

Now we have one more game in Detroit tonight. It was nice to win the first game at Comerica, because now we’re playing with house money, because we’re going to make the trip back to Boston no matter what. So we’ll see. It would be nice to go back up 3-2. I think the Sox are in good position, we’re going back to Jon Lester, and hopefully the bats are going to wake up.

Over in the National League, we’ll see. The Cardinals are going back home up 3-2. It’ll be tough. They Dodgers have Clayton Kershaw going in Game 6, and it’s tough to see anybody really having a good game against him. So I can definitely see it going to a Game 7, then you have Adam Wainwright against Hyun-Jin Ryu in all likelihood. I think I’d give the edge to Wainwright there. But it’s tough to say what’s going to happen in Game 7. I think the Dodgers, if they can get to Game 7 after being down 2-0, I think they’d be pretty pumped up going into that game. They’d be pretty aggressive and fiery, so it would be pretty fun to watch.

I’m able to keep up with the games, especially on the road. On the bus, we have Apple TV so the MLB stuff is on there as well. If we don’t have that going, I’ve got the MLB.com At Bat app going where the pitch comes in as a green ball or blue ball or red ball. So I’m watching all that stuff and trying to keep up with it as best I can, especially during the playoffs.

We’re going to be hammering this album out, we’re going to be going to radio and showing them the songs and singles and hoping that they’re digging it. Here’s the title track to pass around:

Go Sox. I’ll be rooting for them the rest of the way. Thanks to the MLB.com folks for giving me a clean 2004 World Series baseball, another memory of when we Reversed the Curse of the Bambino. We could be headed for a rematch of that series, we’ll just have to wait and see over the next few days.

As we wait for the Sox to head home to Fenway, I thought I’d share with you a couple of pics from a recent trip I had there. I signed my name inside the Green Monster, and got to pose with the 2004 and 2007 World Series trophies. As a diehard Sox fan, it was pretty neat to see all the behind-the-scenes stuff there. I just had the pleasure of spending a day at the MLB Network studio in Secaucus, N.J., and we were there with the crew from Great American Country, doing the Top 20 Country Countdown for their show that premieres at 8 p.m. ET on Friday, Oct. 11. We hosted it with Nan Kelley and also MLB Network analysts and former World Series players Mitch Williams and Kevin Millar. It was a lot of fun — those shows are great. It kind of worked out well in my favor that this week I was No. 1 on the show with “See You Tonight” so that’s pretty awesome.

Someone asked me what it feels like to say “No. 1” in describing your music. It’s an awesome feeling. I’ve got the greatest fans in the world, and they’ve rallied behind me time after time, and they love the feeling of having my back. They love helping me out. That’s great to have a fan base like that. Any show like this, anything like that, they’re quick to get on it.

Just talking baseball with Kevin Millar . . . I’m trying to hold it all in, but that’s crazy. I love when you meet guys like that and they’re just normal dudes, just like how you hoped they would be. Kevin, golly, I remember watching that dude in ’04. He was kind of the ringleader, it seemed like — “Cowboy Up,” calling them all “Idiots.” He seemed like the guy behind it all. It was cool to talk ball with him.

Like I said in the previous posts here, I grew up mainly a Red Sox fan and I was really into it back in ’04. I had Yankee friends. Me and my Dad, obviously we were huge Red Sox fans. I remember thinking, “OK, we’re out. Down 3-0, no one’s ever come back from that.” And then, one game down, two games down, three games down, and somehow we win that ALCS and then sweep the Cardinals to Reverse the Curse. Wait till Eighter sees this!

One of the highlights of the MLB Network visit was when they presented me with a No. 8 Red Sox home jersey. My Dad’s gonna love it. All of us obviously are Yaz fans — Hall of Famer Carl Yastrzemski, who wore that number. His grandson plays at Vandy. It’s just cool, because Vandy’s field is modeled after Fenway. Also 8 was my number, and my Dad’s number was always 8. We always called him The Eighter. I played ball growing up 8. Whenever we’re in crowds now, and he doesn’t want to call my name so people would recognize me, he says, “Eighter!” I turn around, and there he is. Nobody else knows it. That’s kind of our code name now. We’re trying to stay low.

Another highlight was playing a little ball on the Studio 42 field. Taking the Wild Thing deep was pretty cool. I don’t think he was expecting it. Got a little pop on the bat there. Here’s a picture of me about to take a rip: Here are some more pictures of our visit: It was also great to be on MLB Network’s “Intentional Talk” show with Kevin and Chris Rose while I was there. You can watch the clip here, and hope you all are enjoying the #Postseason! 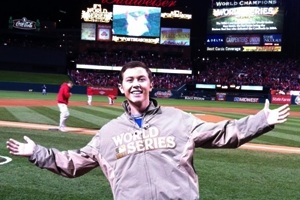